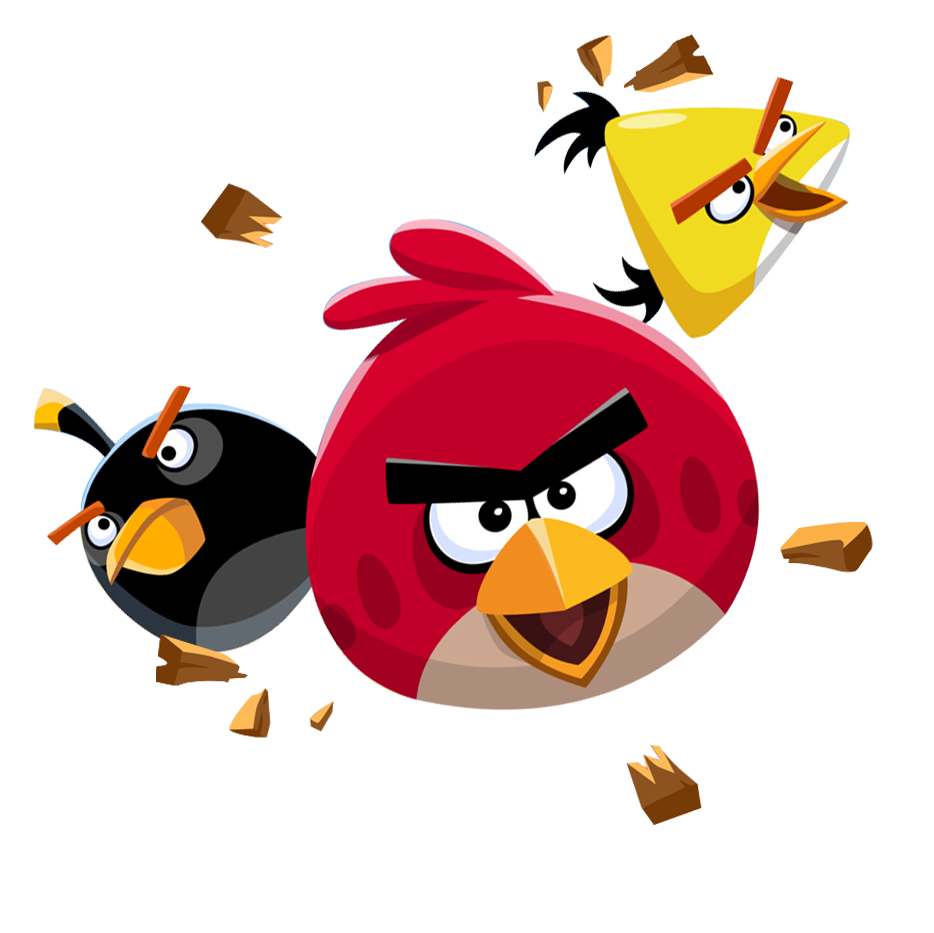 Angry Birds is a hugely popular physics puzzle game. The goal is for players to slingshot various types of birds at at rickety structures in an effort to destroy the big inside or nearby. Players are scored based on how few birds they use to wipe up the map and how much destruction they cause in the process. The selection of birds offered for each level differ in ability; the red bird impacts on obstacles normally, the yellow bird dive bombs before impact when a player taps the screen, the blue birds split into three in mid-flight when tapped, the black bird explodes, and the white bird drops an egg. Player earn or buy Mighty Eagles, which can effectively win an entire level in one swoop. There are multiple versions of Angry Birds available on the BlackBerry PlayBook and BlackBerry 10. Angry Birds Seasons changes theme depending on the time of year (Christmas, for example). Angry Birds Space introduces zero-gravity environments, which are also used in Angry Birds Star Wars. Angry Birds Rio uses the theme from the popular Disney movie.

If you're thinking "Oh, just another Angry Birds game" then think again as Angry Birds Transformers is very much different to the original Angry Birds and it's many sequels. This one doesn't focus on the classic catapult action that we're so used to with Angry Birds, which I think is a nice move from developers Rovio. If you ever played Major Mayhem, that we featured back in August...

The folks at Rovio have been busy it seems working on the next game for their insanely profitable Angry Birds franchise. This time around it's not a racing game but instead it's going to be a brand new RPG game dubbed Angry Birds Epic. Angry Birds Epic is an adventure role-playing game set in a fantasy version of Piggy Island. It offers an awesome storyline, turn-based combat, a...

Yesterday they teased it and today it was unveiled to the world — the next title in the Angry Birds line will be Stella. The upcoming title looks very female-oriented and shows Stella joined by five of her besties for what will surely be plenty of grand adventure. Rovio hasn't released any other details on the new title aside from the fact that it will be coming this fall.  No word on...

We're not quite sure just what it is, or when we'll see it go live (the name and other details will be revealed tomorrow) but Rovio is teasing an all-new Angry Birds release on Twitter. Their last offering, Angry Birds Go, landed on BlackBerry 10 the same day as other platforms, so here's to hoping that this one will be the same. We know what a debacle it was to get the original titles...

Back in October, Rovio announced their latest installment in the Angry Birds series, Angry Birds Go and promised it's arrival in December. Here we are now, eleven days in an the game has arrived in BlackBerry World for BlackBerry 10. This one however, takes a new twist on the franchise and doesn't have you slinging birds across the screen. Instead, it's more a throwback to Mario Kart in...

For those of you who already exhausted all of the planets and levels in Angry Birds Space, Rovio pushed out an update with 35 brand new ones for more hours of slingshot fun. I have to say the update is nice and being able to break the crystal planets to clear the board is quite challenging at times. If you haven't had a chance to check it out, be sure to read through the changelog...

The next offering from developers Rovio will be Angry Birds Go. Set for release on December 11th the good news is that the new game is set to launch at the same time for BlackBerry 10 as well as Windows Phone, Android and iOS - Yay! As you'll see from the above trailer the game is very much different to the Angry Birds we've been used to and this time we get a downhill racing style...

Just in case you still have the itch to play through some Angry Birds, Rovio has now brought more of the series over to BlackBerry 10. Aside from the previously available Angry Birds Space and Star Wars you'll now find the original Angry Birds and Angry Birds Seasons available for purchase in BlackBerry World for all BlackBerry 10 smartphones. Both are priced at $.99 and you can the...

If you're an Angry Birds fan you'll be happy to know that you can now get your zero-gravity on with your Z10 and Q10. Angry Birds Space is now available for BlackBerry 10 devices and features all of the Angry Bird-ish goodness you've come to know and love. Now you can head into space to take on the evil space pigs in over 170 levels with plenty of free updates to come. The new version...

We go hands on with Angry Birds Star Wars for BlackBerry 10 - Ca-Caw!

Everyone likes a bit of Angry Birds don't they? I do, so I was pretty pumped to see Angry Birds Star Wars pop up in BlackBerry World for BlackBerry 10. We told you just the other day that it had arrived so we thought we would show just how good it looks on the BlackBerry Z10. At the London launch earlier in the week they had on of the chaps from Rovio up on stage and as well as the Star...

When we wrote up two days ago that Angry Birds Star Wars for BlackBerry 10 is available in BlackBerry World, the price was 99 cents. That said, with the BlackBerry Z10 officially on sale now in the UK and going on sale in Canada next week, the price has already taken a drop to the low low price of FREE. From what we can tell the price change *just* took effect, and as we post this we'...

Angry Birds updated to version 2.3 – it's time for the pigs to have some fun

If you're sitting around with nothing to do on a Friday night, you may want to open up App World on your BlackBerry PlayBook as Rovio has pushed out an update to the Angry Birds franchise. The latest update for Angry Birds brings the game up to version 2.3. The Bad Piggies don't just have a new game – now they've taken over Angry Birds with 15 of the PIGGEST levels ever! So why...

Do you want Angry Birds Star Wars on BlackBerry 10?

How important is it to have Angry Birds on BlackBerry 10 at launch? Yesterday Rovio once again dropped a huge announcement. Angry Birds Star Wars will be hitting the world in about a months time on November 8th, destined to take over phones and tablets everywhere. While there was the obvious note of iOS and Android, there was nothing said about the BlackBerry PlayBook. We...

It's been a few months since we last saw an update to Angry Birds Seasons for the BlackBerry PlayBook, but the day has come and v2.6 is now available to download! In the update you will find not only a new pink bird, but Rovio has also added in two more levels for your bird flinging pleasures. The first is Piglantis with some interesting twists involving water, and the second is Back To...