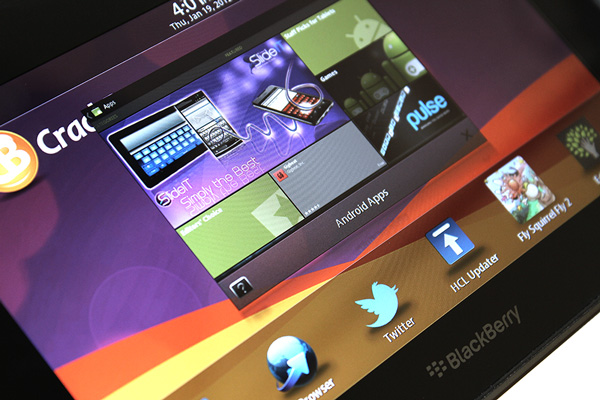 *UPDATED* - We reached out to RIM for further clarification on this matter because as it stands, some Android apps do currently have ads in them. In speaking with them, it was noted that ads will work inside the Android apps the only thing however that is not supported is RIM's own BlackBerry Ad services. In other words, Android developers can still monetize their apps, just not using BlackBerry Ad services.

With OS2 for the BlackBerry Playbook so close to release many of us are anxiously awaiting our favorite Android applications to be ported to the BlackBerry PlayBook. While we have alreday heard there would be some limitations on what the PlayBook could run as far as Android apps, RIM has made the process extremely easy for developers so we have held on to hope of our favorites making their way over. Developers who ported their application from Android to BlackBerry were eligible to receive a free BlackBerry PlayBook, but was that enough to seal the deal for them?

A huge pain point has surfaced, and it has come to light that Android applications that are running on the BlackBerry PlayBook will not support mobile advertising. This means that developers who launch free applications that feature ads inside as a source of monetization will not be able to monetize their application, making the porting process far less appealing. Another downside is that Android applications will not allow for in-app purchases, so the developer is stuck either going completely free, or putting a price tag on the application and hoping for the best which is far from the ideal situation for these developers.

RIM does not feel as though this will have a huge negative impact on the PlayBook and the success of OS 2 as a whole. Recently they have noticed a huge increase in developer interest with 6,600 new developers registered in just six days, which actually caused them to want to extend the free PlayBook offer to continue to drive the interest of the developers.

“While Android is important to fill out the long tail of apps, the focus is on building out native and HTML5 apps,”(Jeff Gadway, RIM’s Senior Brand & Marketing Communication)