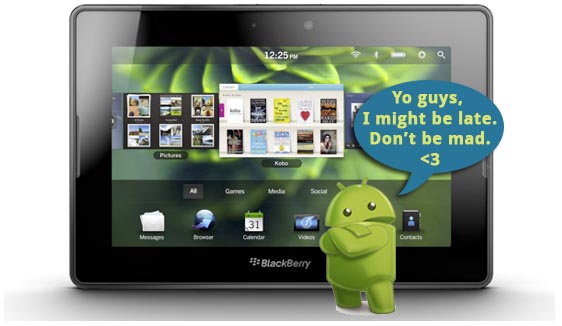 It's no secret that Research In Motion has plans to release an official Android app player for the BlackBerry PlayBook, the only question is when. Last month brought a leaked version, and though buggy, it does work. RIM was quick to make an official statement regarding the leak, saying:

"An older version of the Android App Player beta software for the BlackBerry PlayBook was inadvertently posted and has since been removed. We recommend that users refrain from downloading and installing this software since it is outdated and non-functional in many respects. The official beta release of the Android App Player for the BlackBerry PlayBook is on track for release later this summer."

We've all seen delays related to the PlayBook already, so it's likely no surprise to anyone that the Android app player may be delayed as well. Engadget revealed today they have a reliable source telling them this feature is now pushed back to late fall. No word on why this is being said, but hopefully it's for good reason like waiting for the 3G PlayBook to hit shelves or adding in a bunch of really cool features we haven't heard about yet ;-)