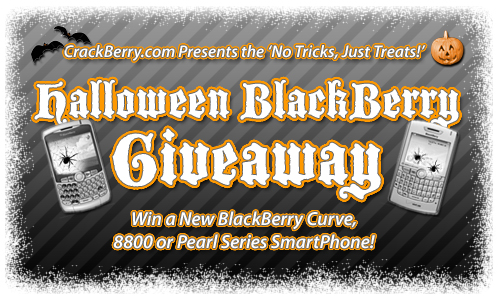 The Trick or Treaters have come and gone, and that leaves only one thing left to do this Halloween night.... announce the winners of CrackBerry.com's NO TRICKS, JUST TREATS Halloween BlackBerry Giveaway.

The Grand Prize winner takes home a new BlackBerry Smartphone of choice along with a $100 Accessory coupon to the CrackBerry.com Store. The two runners up also receive $100 Accessory coupons to the CrackBerry.com Store. For everyone else who took part in the contest (all you had to do was make a post on our Halloween BlackBerry Giveaway thread - take a read through, it's pretty entertaining!) your next chance to win a BlackBerry is already close at hand by way of the Smartphone Experts 1st Annual Smartphone Round Robin.

See the winners, what they posted and the
video of the official drawing >>

Grand Prize - tumbleweed13
tumbleweed13's Lucky Post: I am jealous of my wifes new BlackBerry. I want one.

Runner Up #2 -Hairbear1954
Hairbear1954's Lucky Post: Cool beans!! Love the idea...great way for everyone to get involved. Chances of me winning are slim to none, but I love my Curve already. Super awesome phone. It is a work horse for me just like the Pearl was. I use this phone for everything I do. Best luck to the winner!!

Official Video Drawing:
As promised, I said I would post the official drawing on YouTube. I had wayyy more Trick or Treaters than I expected tonight, but managed to squeeze in the draw between kids. The video is a bit dark - I had to keep the lights low or else I would have been interrupted non-stop with kids at the door! Oh, and when I say there's 2,000 people in the bucket... I mean the names of 2,000 people! One Take, No Editing, No Excuses! :-)

Congrats to the Winners and