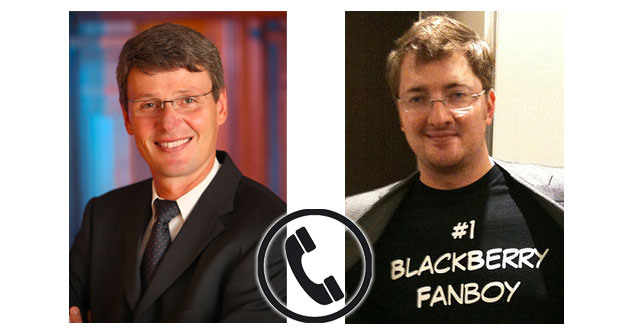 No BS.... at 9:36pm EST tonight, just minutes after the news became official that Thorsten Heins was appointed the new CEO of Research In Motion, my Bold 9900 rang with an incoming call from a 519 area code. Knowing 519 = Waterloo, I answered (good thing!), and within seconds was put through to none other than Thorsten Heins himself...

"Hi Kevin. I know you've been wanting this position for a while now, so I just wanted to let you know the news personally that I'm the new CEO of RIM..."

Seriously. I don't think I've ever quite felt so honored and completely speechless/stunned in my life, and in this case both happened at the same time. Thorsten and I spoke for a couple of minutes - I congratulated him and expressed my enthusiasm over the news. As you can imagine, he's in a whirlwind right now, so for him to take the time to reach out means a lot. And in talking to him it's clear that he is excited to lead Research In Motion and is as passionate about BlackBerry as I am. He also expressed his appreciation for our enthusiasam over BlackBerry and told us to keep it up (Absolutely!!).

It's hard to express just how big of a change this is for RIM. Let's put it this way. Since launching CrackBerry.com in 2007 I have been wanting to get an interview with RIM's CEOs. It has never happened. With Thorsten, it happened in literally minutes, and it was the CEO who made it happen, not the blogger. I have nothing but the utmost respect for Mike and Jim and all they have done for BlackBerry over the years, but it's clear that for BlackBerry to thrive again RIM needed a shake up, and I think Thorsten is going to do an amazing job leading the way.

Questions for Thorsten: On the call Thorsten said he had time for two quick questions, but honestly, my brain was too in la la land to come up with anything quality. I'm going to connect with Thorsten again in the morning for a short interview, so if you have any questions you want answered CrackBerry Nation, let me know in the comments and I will ask RIM's CEO first thing.

UPDATE: RIM's CEO kept his word and followed up with us later in the week. Check out CrackBerry's First Interview with RIM's CEO here.