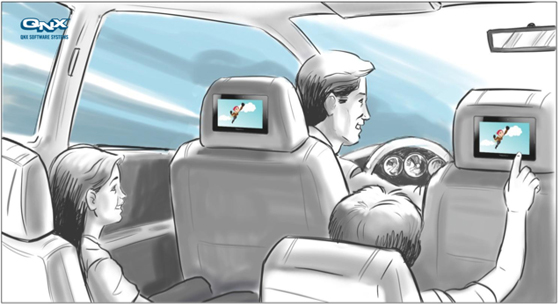 Yesterday, QNX Software Systems (wholly owned by Research In Motion), made two important announcements. The first, and most important, is the pending launch of an SDK for the automotive market. This December, based on RIM's open source WebWorks project, the HTML5 SDK for the QNX Car 2 application platform will be released.

The second announcement pertains to support for the Nvidia Tegra chipsets for in-vehicle use. This gives the QNX SDK the power to do high quality video renders of things like Google Earth.

Together, what does this means? Think about the BlackBerry 10 WebWorks SDK modified (and extended) to accommodate the kinds of things you'd want to do within a car infotainment system. Specific APIs have been created so developers can get access to actual car data, and control certain systems. For example, a developer might want to have data on speed, acceleration, GPS position, but might also like to control the car's heating and air conditioning system, or interact with the display and audio system.

The QNX press release strongly emphasizes the ability of a an automotive infortainment application developer to emulate the results of an app without having to actually run it on a live car infotainment system. To any mobile developer this is obvious stuff. Sure, we want live hardware to do real world testing. But it's sure nice to have emulators to do some initial conceptual work and build prototype apps.

To the best of my knowledge, RIM is the only company that can now offer this set of tools to the massive automotive market. And while the number of cars making use of this technology in 2012 through 2014 may be small, the opportunity is growing tremendously. Perhaps the biggest driver is the emerging trend of cellular connectivity in cars?

According to a recent report by Scotia Capital Markets, only about 5% of cars have a mobile connection today. I think we can all agree that things will be very different in 10 years. The automotive industry is probably one of the most obvious industries to benefit from cellular data connectivity. In fact, there is a European Union initiative called eCall which mandates all new cars to have mobile connectivity for emergency response by 2015. Unlike the widely debated analog TV shut-off, this doesn't look like the type of government regulation that manufacturers can push back on due to technology readiness reasons. The technology is ready, and it's cheap in comparison to the total price of a car.

So the future is clear. Cars will have high quality, high speed data connectivity via LTE or whatever technology makes sense. RIM and QNX Software Systems have deep relationships with many of the biggest names in the car business. They have a full HTML5-powered SDK to hook into their platform. These are things that Apple and Google do not offer, nor are they likely to offer anytime soon. This is RIM's opportunity to go after and monetize. And the beauty of it is that this market can grow independently of the smartphone market.

Sure, people will want to connect their phones to their cars. That's what Bluetooth is for. It works well. But cars are high-cost items with useful lives in excess of 10 years. In a world where software improves astronomically every couple of years, it seems unacceptable for cars to run on outdated software. RIM can solve this problem and profit from it.

RIM's network operations center (NOC) has a big play here. Car manufacturers will most certainly want to offer applications or hosted services to their customers. A car manufacturer is not a wireless carrier. They don't own any wide area customer-facing communications infrastructure. So if RIM was able to convince carriers to use its NOC back in the early 2000s (and these carriers already ran networks!), do you think RIM will be able to convince automotive vendors to use its NOC? I suspect so. It seems pretty obvious that Audi, BMW, and others do not have skills in running a service network (and by "service" I don't mean oil changes).

Longer term, this is one of those industry shifts that could help earn significant recurring revenue. And that's important considering the risk of RIM losing a good chunk of current BIS revenue.

Technology-wise, I am thrilled to see RIM pushing HTML5. They're leveraging a set of tools that is widely becoming a global standard among web developers. The type of infotainment apps that I imagine people using probably don't need a native toolkit like Cascades and the BlackBerry 10 NDK.

When RIM bought QNX back in April 2010, I had RIM co-founder Mike Lazaridis up on stage at an investor presentation. I asked him why they bought QNX. We knew the near-term answer related to a ground-up replacement of the aging BBOS. But Lazaridis and RIM hadn't yet acknowledged this publicly. So instead, he said that the car is the greatest accessory for a smartphone.

Wouldn't it be interesting if BlackBerry ends up being the #3 smartphone platform, but the #1 automotive platform, generating more profit from cars than from phones?