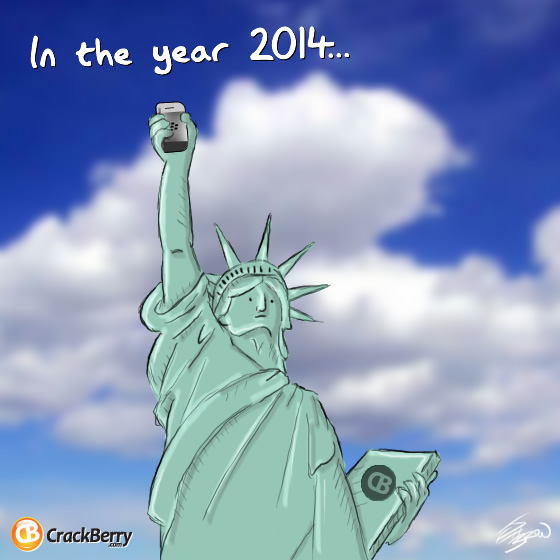 Following Research In Motion's depressing Q4 earnings announcement last week, there has been no shortage of articles and commentary out there voicing skepticism against RIM's prospects for the future. We've also witnessed a lot of hope and support for RIM, especially from the BlackBerry faithful, yours truly included.

Adding balance to their reporting, yesterday Bloomberg News put up a great article looking at RIM from the position of the BlackBerry loyalist, which includes some quotes from CrackBerry members. Be sure to check out the article below and send it around. And remember, it ain't over yet. #TEAMBLACKBERRY

NEW YORK - For BlackBerry fans, these are dark days. Research In Motion is losing market share to Google and Apple. New chief executive officer Thorsten Heins has even said he would consider a sale or partnership. That has BlackBerry fans fretting over their favorite phone's future.

Like fans of many iconic products, BlackBerry loyalists love the design of their phone. They praise its fast messaging features and, perhaps most of all, the tactile pleasure of typing on a real keyboard. BlackBerry loyalists come from all walks of life, from high-powered CEOs to freelance artists and students. They all have one thing in common: They can't imagine a world without BlackBerrys.

"As long as I stay involved in this type of job, I'll need a BlackBerry," said John Yester, who has been a firefighter outside of Pittsburgh for the past 15 years.

Yester, 31, started using his BlackBerry's instant messaging service three years ago to coordinate with fellow firefighters when responding to emergencies. He likes that it's fast, with a notification system, and easy, with a physical keyboard.

"BlackBerry is reliable in my line of work, especially with the dispatch center and in any emergency," Yester said. "I tried Android last year and the email capabilities were actually very frustrating. I switched back."

BlackBerry phones aren't likely to go the way of the Palm Treo, Kodachrome film, or Saab cars anytime too soon.

Fortunately for RIM, there are 75 million others out there like Yester, including U.S. President Barack Obama and Venezuelan President Hugo Chavez.

While the BlackBerry has lost its top spot in Canada and U.S. to the iPhone, it continues to grow in emerging markets. The Waterloo-based company still has seen its stock slide 74 per cent in 12 months, and the challenge for CEO Heins is to recover the magic in North America before it's too late.

Kevin Michaluk, who founded fan site Crackberry.com after "crackberry" became Webster's 2006 word of the year, says traffic has stayed level as international users replace those in the U.S. RIM outshipped Apple by a margin of more than 3-to-1 in the Middle East and Africa last year and BlackBerry outsold iPhone in Latin America 5-to-1, according to research firm IDC.

Michaluk said he likes that a BlackBerry allows him to be more efficient, by emphasizing fast messaging, as opposed to helping him waste time with games.

"People's priorities are so messed up because if they actually knew the BlackBerry experience and how much faster it is, they wouldn't use the other phones," he said.

That's all that Michael Hayes, a 32-year-old investor, says he needs. As he works from home in Tampa, Fla., he can step outside and run errands, staying connected to work to the extent that he has calluses on the hand where his phone sits. His girlfriend makes fun of him.

"I don't use my phone to play Draw Something or Angry Birds or anything," he said, referring to the games that take advantage of touch screens on iPhone and Android phones. "If I'm doing something, it's pretty important."

Some customers are hanging on for BlackBerry Messenger, a system that comes loaded on the devices which allows any two people to communicate instantly for free. Clyde Berry, a 45- year-old music producer in Fall River, Mass., uses the service to communicate with all his clients. You couldn't pay him to give up his 2007 BlackBerry Curve in exchange for a new iPhone, he said.

"I'm able to keep in contact faster with clients, and we can actually have real conversation," said Berry, who describes himself as a "crackberry addict" in his Twitter profile. "I also use the password protector a lot and keep a lot of personal and confidential information."

BlackBerry continues to thrive overseas. In Saudi Arabia, teenagers have embraced RIM because they can flirt using its encrypted and free BlackBerry Messenger, which allows them to avoid local religious police who restrict interaction between unmarried men and women.

In Venezuela, where the device is ubiquitous on the streets of Caracas, President Chavez has dubbed his BlackBerry and Twitter account his "secret weapon."

RIM is also popular in Indonesia, where the company is planning to add 4,000 retail stores, kiosks and other outlets to keep up with demand. Rioting broke out at a November event in Jakarta, sending 10 people to the hospital, when a promotion for RIM's latest BlackBerry Bold phone ran out of devices.

RIM could still make a comeback in the U.S. market, its loyal fans insist, especially with the planned release later this year of BlackBerry 10, a new feature-rich operating system.

"BlackBerry has a strong brand," Michaluk said. "America loves a comeback story. And if RIM can pull together the BlackBerry 10 story, people will buy it."