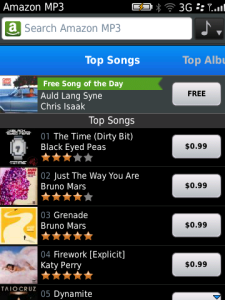 Looking for a new music alternative for your BlackBerry? How about trying out Amazon MP3? The new app launched today and allows users to browse, preview, download and store music as well as share with friends. If you're looking for an iTunes alternative, this may be the one for you. Features include:

Amazon MP3 is currently in beta and is available free in the BlackBerry App World test center. Currently the app is only available in the US. Full press release after the break. Hit the link below for more.

Amazon MP3 for BlackBerry smartphones lets users discover songs, artists and albums, then lets them buy and download tracks from Amazon with just a few clicks. The app also offers delivery options to suit all data plans, so tracks can be downloaded over Wi-Fi(R) or cellular networks. Users are able to easily share their latest musical finds with their friends by sending comments and links for specific tracks through BBM(TM) (BlackBerry(R) Messenger), email, SMS, Twitter and Facebook(R).

"Amazon MP3 for BlackBerry smartphones makes it fun and easy to get new music and we're thrilled to work with Amazon to bring this service to users," said Alistair Mitchell, Vice President, BBM Platform and Integrated Services. "Users can directly access Amazon MP3's massive catalogue to easily find, preview and buy music through the BlackBerry media player, and then share their thoughts with their social circle, giving them a uniquely BlackBerry experience that combines communications with multimedia."

Other key features of Amazon MP3 for BlackBerry smartphones include: