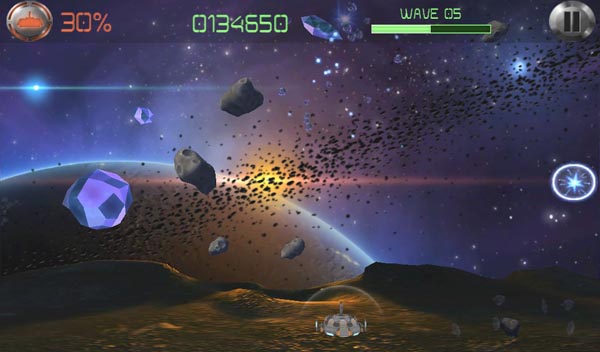 I'm always on the lookout for new games for my BlackBerry PlayBook that aren't exactly mainstream (ie Angry Birds). Not that I have anything against Angry Birds, but it's always good to broaden your horizons. I recently discovered AlphaWave by Hardline Studios.While not a familar name, you're sure to recognize the concept.


AlphaWave is a throwback to old school arcade shooters. High definition graphics and a great soundtrack give this game an update and make it more modern, and intense, fast-paced gameplay keeps you coming back for more. Survive through wave after wave of asteroids as they fall down around you, taking on different shapes and speeds. Shoot them out of the sky, and don't let them hit you, and you're on your way to victory. As you progress through the waves the gameplay gets more difficult, really challenging you to make it through. There are three different levels of difficulty to choose from, so as your skill increases you can push yourself with the harder levels.

You can grab a free trial of AlphaWave, or the full version for just a buck, in BlackBerry App World. I hope the developers keep working on the game and release more levels and obstacles. As it stands I think it's worth the $.99 price tag, but I know others out there will soon be looking for more. Check it out!