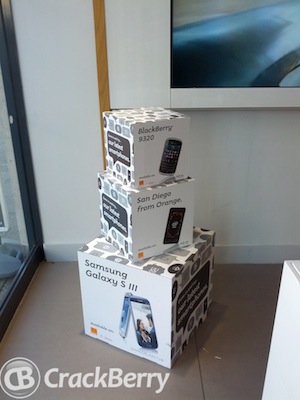 It's interesting times at the moment in the UK for EE (formerly Everything Everywhere), who own both Orange and T-Mobile UK. We have mentioned in various posts about the company rolling out their new 4G LTE service in the UK at the end of October, the first network to do so in Great Britain.

Today EE has announced that all 700 of the Orange and T-Mobile stores will be re-branded as EE by the end of the month to coincide with the 4G roll out. The news arrives along with some special EE staff training that is happening at the NEC in Birmingham where 12,000 internal staff and 3000 partners will learn about the new brand.

Now I could be totally wrong but I would bet that if you are looking to pick up a 4G BlackBerry 10 device in the new year EE is where you need to be at. They have not officially said they will support BB10 but they clearly will - who wouldn't - it's awesome!

I popped into my local EE store earlier today and although they have the new EE sign above the shop the internals are still very much Everything Everywhere. But, that will change over the next few weeks so I suppose I had better plan another visit soon.

As well as EE having the new 4G service as a huge selling tool I am pretty sure that they are the only retail chain in the UK where every phone on display actually works. Using dummy ones is a total waste of time in my opinion so kudos to them for that.

Keep your eyes peeled for more EE news soon including price plans and data tariffs once BB10 rolls out. Is it next year yet?