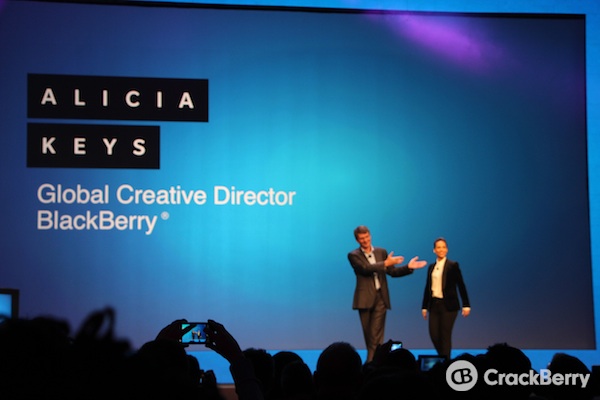 In a totally surprising move, BlackBerry CEO Thorsten Heins announced a new position in the company today while on stage unveiling BlackBerry 10. The new Global Creative Director role at BlackBerry will be filled by none other than Grammy winner Alicia Keys. In her new role, Mrs. Keys will be talking with carriers and other partners about BlackBerry and taking things to a whole new level. Awesome to have such a big name on board and we hope that there are plenty of good things to come from it.

"Alicia Keys has come to BlackBerry because she believes in the product and technology, and subscribes to our overriding philosophy to 'Keep Moving': to empower people through mobile computing and communications," said BlackBerry President and CEO Thorsten Heins. "We are excited she will be bringing to us her enormous capabilities, as well as a vast network of relationships in the entertainment, social media and business communities, to help shape our brand and grow our business."

In her new role, Keys will work closely with app developers, content creators, retailers, carriers and the entertainment community to further shape and enhance the BlackBerry 10 platform, and inspire creative use through its remarkable capabilities and functionality. From music to books, to film, to apps, Keys will lead the charge of enhancing entertainment consumption and distribution, through the power of BlackBerry 10.

"Staying connected has become a vital part of my creative process," said Keys. "I have been using the BlackBerry 10 for a few weeks now, and I'm truly inspired by its innovation. It has entirely revolutionized the experience. I know the potential this platform has to help creative people be more productive, and help productive people be more creative. This is such an incredible age to be living in, with such profound advances in communications and technology. As Global Creative Director, my goal is to inspire creativity with this platform, and I'm so excited to jump right in."

At this morning's launch event, Keys revealed BlackBerry's new "Keep Moving" Project, which engages BlackBerry users in exclusive and compelling experiences created by inspirational and multi-faceted artists, writers, designers, filmmakers, musicians, and athletes. Renowned film director Robert Rodriguez (El Mariachi, From Dusk Till Dawn, Sin City), and author Neil Gaiman (Coraline, Stardust, The Sandman) will join Keys as the first three "BlackBerry Partners" leveraging the power of the new platform to create original content and special user engagements. The essence of these creative projects is that they are collaborations between the artist, BlackBerry and BlackBerry users around the world.

Frank Boulben, BlackBerry Chief Marketing Officer said of the Keys appointment, "Alicia has tremendous reach, which makes her the ideal global creative director to inspire and empower creative people around the world to push the boundaries of the mobile experience. It is vital to our success to engage in a dialogue with creators and help them better succeed at what they do. We're thrilled to have Alicia's insight and passion shape our brand and grow our business."