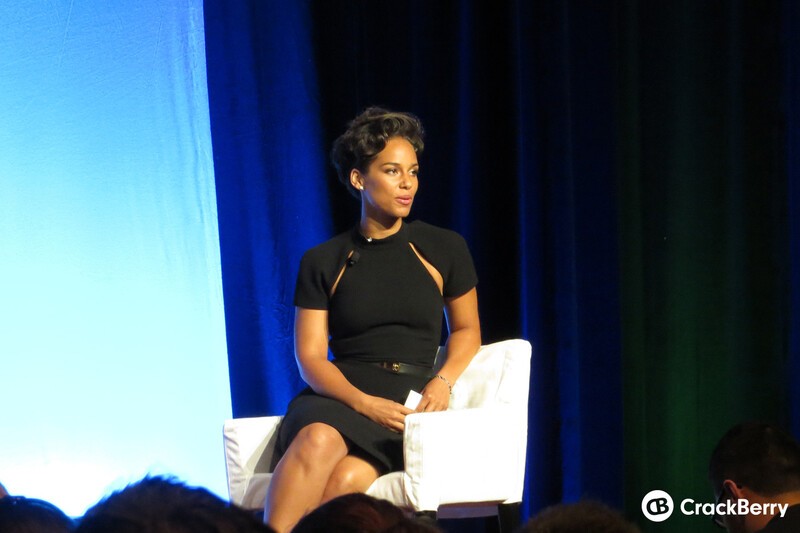 When Alicia Keys took the stage at the BlackBerry Live keynote she not only brought up the scholars program for women in tech, but also mentioned an astonishing statistic: 56% of BlackBerry users are women. Building on that momentum, Ms. Keys moderated a session later in the day titled Women in Tech: Redefining Ambition with a distinguished panel that consisted of Reshma Saujani of Girls Who Code, Elisa Camahort-Page of BlogHer, and Leila Janah, Founder of Samasource.

The main focus of this session was to not be another “women in tech panel”, but more of a conversation kickstarter. Each panelist brought their own unique view on what this concept means to them and their role in the tech world. They also delved into how important it was to foster and inspire the women in our life (i.e. Wives, sisters, daughters, etc.) especially teenagers so that they can be bold moving forward and be a “champion of ambition.”

Some interesting facts and figures brought up was how far women have come. Back in 1976 the number of working women with children was only 18% while as of today the number has skyrocketed to 86%. Furthermore, 66% of women produce the world's output but only earn 10% of the income and 1% of the assets, and 85% of consumer purchases are women. When you think about it, you wonder why more women aren't in technology related positions today.

Topics varied from having flexibility to juggle work and, home, etc, to the question of whether or not to leave a steady corporate job to venture out as an entrepreneur. In that respect they discussed examples from their own experiences including how our culture needs to be redefined so that every gender can work together. For example, Leila took the opportunity to share examples of women in poverty stricken nations she's helped become the primary breadwinner and how they have found a way (in that society) for that new role to be socially and culturally acceptable. Her non-profit organization, Samasource, helps unemployed women in impoverished countries find digital work in hopes of alleviating poverty.

Frank Boulben closed out the panel by posing the following question: "What can we do beyond raising awareness?” How do we let women of all ages know the opportunities they are missing?  In a concise manner he set forth two steps to help start this journey: 1) Awareness: Having Access to further initiatives and programs, and 2) Concrete Action: how they themselves can initiate the move forward (i.e. As Elisa stated, encouraging people to teach themselves Computer Science). This is a new direction BlackBerry is undertaking with programs to encourage women to enter in the technology field and having Alicia Keys lead the way by being Global Creative Director.

So many questions were raised that understandably could not be discussed in the short time the panel had though I did wish it was more than the 30-45 minutes allotted. However, it was thought-provoking, made a lasting impression, and opens an ongoing discussion on what it means to be a woman passionate about technology.