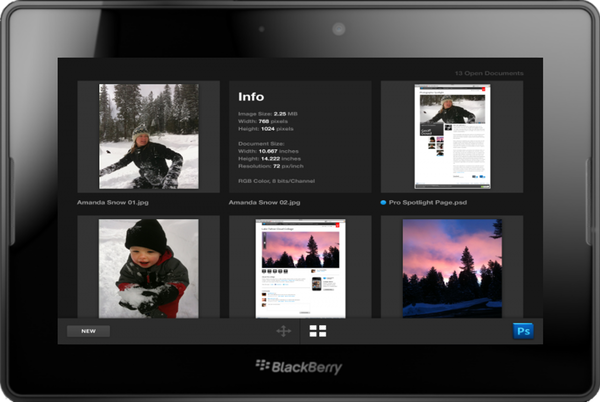 Adobe has been working very closely with Research in Motion for the past little while, so we really can't say we're surprised at the information they just announced surrounding the Photoshop Touch software development kit. The SDK works in conjunction with Photoshop CS5 and a new scripting engine that lets Android, BlackBerry and iOS tablets to interact with Photoshop on the desktop. iOS versions of Lava, Eazel and Nav should be available in early May, but the new SDK will allow apps to be developed for the BlackBerry PlayBook and other tablet platforms such as Android.

Looking at the suite of tools, the concepts behind them are rather easy to understand -- and most importantly, use. Your tablet connects to the PC via a secure connection, fire up the apps you are wanting to work on and you are all set. Adobe Eazel makes your tablet a virtual Eazel where you can create content on the tablet and have it seamlessly imported into Photoshop in fact, anything you create on the tablet just appears in Photoshop on your computer.

To help kick things off, Adobe's Creative Suite will be updated to Version 5.5 and developers can access the free SDK at www.adobe.com/devnet/photoshop. Current Adobe Photoshop CS5 users can update starting May 3. Adobe also is launching new subscription-based pricing for Photoshop, for as little as $35 a month, which is pretty awesome for those not wanting to purchase Photoshop at full cost. More details and information about subscription pricing can be found at adobe.com/go/cssubscription.