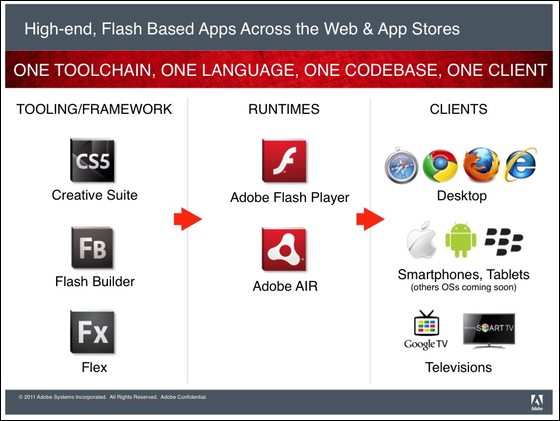 Although BlackBerry smartphones are yet to support Adobe Flash and Adobe AIR, the BlackBerry PlayBook handles both quite nicely. Some new announcements from Adobe today, let us know that the integration with the BlackBerry PlayBook Tablet OS has quite a few changes coming to it for the better. Flash Player 11 and AIR 3 frameworks have just been announced and with those releases Adobe is looking to take things to the next level.

Adobes new framework allows for not only 2D content but now 3D content when creating games, something that Adobe promises will deliver a richer, more immerse experience across a multitude of platforms including the BlackBerry Tablet OS, Android and even iOS.

The frameworks don't stop there though -- for developers who are interested in creating applications Adobe, has a lot built into these releases. NFC, content protection, HD Video acrosss platforms, rental and subscription support and more. If you're looking to be building applications using the Adobe tools, you'll want to read on past the break for the full details.

SAN JOSE, Calif. — Sept. 21, 2011 — Adobe Systems Incorporated (Nasdaq:ADBE) today announced Adobe® Flash® Player 11 and Adobe AIR® 3 software to enable the next generation of immersive application experiences across devices and platforms including Android, Apple iOS (via AIR), BlackBerry® Tablet OS, Mac OS, Windows®, connected TVs and other platforms. As the game console for the Web, Flash Player 11 and AIR 3 allow game publishers to instantly deliver console-quality 2D and 3D games over the Internet to nearly all PCs and many other devices. Media companies can take advantage of new features to seamlessly deliver protected feature-length, cinema-quality HD video through the Web, in mobile apps, and even with surround sound for connected TVs. Flash Player 11 and AIR 3 provide a cross-device entertainment platform, enabling the best in online gaming and premium video while helping content publishers to reach the broadest possible audience with highly-leveraged development investments.

Dozens of new features in Flash Player 11 and AIR 3 allow developers to deliver a new class of gaming and premium video experiences, as well as sophisticated, data-driven applications with back-end systems integration across devices, including the iPhone and iPad via AIR. AIR native extensions add support for unique device features and native code libraries, empowering developers to freely choose the right mix of Flash, HTML5 and native code to provide powerful user experiences across PCs and devices. Flash Player 11 and AIR 3 will be publicly available in early October. Flash Builder® and Flex, Adobeʼs open source framework for building mobile, Web and desktop apps, will offer support for the new features in an upcoming release before the end of the year.

“With this milestone release Adobe pushes the envelope of what is possible on the Web with a typical PC and opens up a new world of immersive, high-performance gaming experiences,” said Danny Winokur, vice president and general manager of Platform, Adobe. “Flash offers the best way for content owners to deliver their most demanding experiences, including games, premium video and sophisticated data-driven apps, to all of their users, while HTML 5 tools such as Adobe Edge and Dreamweaver® are ideal for building interactive Web pages, rich ads, branded microsites and general- purpose mobile applications.”

Flash Player 11 and AIR 3 offer dozens of new features including:

“Zyngaʼs mission is to connect the world through games by bringing play to everyone, everywhere,” said Cadir Lee, CTO of Zynga. “In order to do that, weʼre committed to building mainstream entertainment across all devices, platforms and applications, whether itʼs through Flash or HTML5. We look forward to the release of Adobe Flash Player 11 and Adobe AIR as next-generation applications to help bring Zynga games to our players worldwide.”

“We strive to bring games to our customers wherever and whenever they want to play,” said Mark Vange, vice president and chief technology officer, EA Interactive. “The ubiquity of Flash helps EA to bring our chart-topping games to a broader variety of platforms and connect with consumers across a wide range of devices.”

“In ʻPetz World,ʼ players can adopt, train animals and take them on exciting adventures around the world,” said Shara Hashemi, senior international brand manager, Ubisoft. “Itʼs important the animals in ʻPetz Worldʼ act as if they are alive and behave like their real world counterparts. Flash Player 11 with fully hardware accelerated 3D graphics allows us to deliver the same high-quality animations and 3D models on the Web that our players have loved for years on consoles.”

"The opportunities for casual gaming on desktops, tablets and other mobile devices are endless and without Flash we wouldn't have been able to create such beautiful, rich and interactive animations," said Jakub Dvorsky, game designer and director, Amanita Design. "It's absolutely crucial for us to reach the widest possible audience without having to start the development work from scratch for each platform. With Flash, we were able to revamp Machinarium in a matter of weeks and bring it from the Web to the iPad as an app in less than two months with other platforms like Android and BlackBerry following soon."

“Adobe Flash Player with 3D lets us render a tremendous number of buffered triangles quickly with excellent performance and stability,” said Michael Plank, co-founder, Pro 3 Games. “It was clear from the beginning that Adobe Flash was the perfect solution to deliver browser-based, console-quality games with powerful visuals and interactivity. The develop once, deploy anywhere capabilities enable us to engage gamers everywhere across Web browsers and sets us up nicely to move into the mobile space.

"Adobe Flash makes it easy to extend the reach of our brand and our games because of the deep market penetration of Flash Player and that worldwide ubiquity is critical for us," said Anton Volkov, chief technology officer, AlternativaPlatform. "Adobe Flash Player 11 with Stage 3D provides unique functionality, including native 64-bit support and asynchronous bitmap decoding, to allow us to leverage both 2D and 3D components for the best gaming experience possible."

Flash Player is supported on more than 98 percent of Internet connected PCs today and by the end of 2011, Adobe expects more than 200 million smartphones and tablets including Apple iOS devices to support Flash based applications via Adobe AIR. By the end of 2015, the number of devices that will support Adobe AIR is expected to increase to 1 billion.

Adobe AIR, a superset of Flash Player, enables developers to leverage existing code to create and deliver standalone applications across devices and platforms. Thousands of Flash based applications have already been created and made available on Android Market, iTunes App Store, Samsung SmartTV Store and BlackBerry AppWorld™ today.