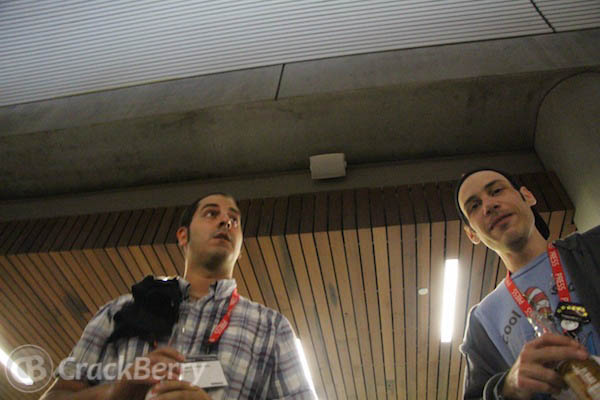 Adam Zeis at left at BBJam Americas.. when he had plenty of battery life.

Believe it or not, I'm writing this on my BlackBerry. It may be the last thing I do before my battery dies, so it might even get cut short before my intended conclusion. As I write this I'm on my living room couch drinking a cup of instant coffee (I've had worse), wearing a giant wool hat and while the room is hovering at around 55 degrees.

In case you didn't know, the East Coast got hit by a crazy big storm this weekend. Hurricane Sandy is one of the biggest we've ever seen, and for the second year in a row my family and I are not only left with a rescheduled Halloween, but also without power. Unlike last year however, no one I know has power either, so we're all stuck on our own until things get back to normal. The good? Thankfully I have my BlackBerry Bold 9900, iPhone and PlayBook to keep me informed. The bad? All my batteries are almost dead.

I started out with a New Trent 18000mAH external battery to charge all my goodies. Its been working like a champ so far but I can only assume it too has little juice left. Thank goodness for car chargers. When we get to that point, we'll have to sit in the car for a bit to get juiced up.

So far the only real connection I have to what's going on outside is through text messages with family and friends as well as Twitter and Facebook.

Lots of people take social media sites for granted, but I can't express how thankful I am for them during a natural disaster. Not only did I know when and where Sandy would hit by me, but in the aftermath I also know where I can get water and ice, find gas (nowhere near me without a 2hr wait in line), a rough idea of when my power will be back, how my family and friends are fairing and what my county is doing to help families recover.

For a few hours after the storm, phone calls were crap. Most wouldn't connect at all and others would drop off mid-conversation. Text, Facebook and BBM kept me chatting with people so I knew everyone's status. Web browsing hasn't been the greatest but I have been able to get up to speed on news about the storm.

Last year we were left without power for nearly five days. This year we're going on three so far with an expected 5-7 to go before we get it back. Power and tree crews numbering in the thousands drove in from all over the country to help things get back up and running.

So what's the point Adam? Is this a sob story? No, its not. The point is that until now, I didn't realize just how valuable my BlackBerry (or any phone) can be in a time like this. Also how amazing Twitter is for staying informed. In my hand I have a tool that keeps me in touch with "the outside world" while I stay in my house, tending to my kids and keeping them warm and fed until we get back up and running.

Oh, and yes, I do plan on shaving today so I can start my Movember goatee. I'm going to nickname my beard Sandy for obvious reasons and it's going to be fierce.