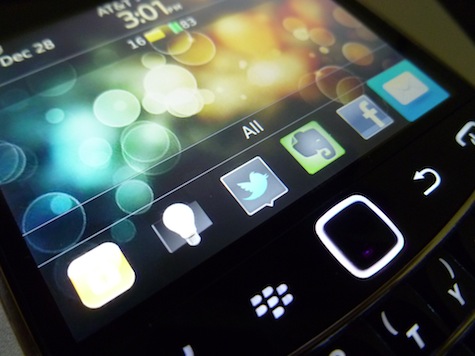 Like every BlackBerry user I have a set of favorite apps. The ones I find myself turning to nearly every time I pick up my device. I'm not talking about the native apps like BBM, Messages or the Browser - think third-party apps that serve a specific purpose. I'm a big Twitter user on the go so that's a big one, and I also use a third-party app to lock my device. So just what are my most-used apps of 2011? Keep reading to find out.

This one may be cheating a bit since it wasn't released until late in 2011 (for BlackBerry 7 devices at least) but I figure since I use it nearly every time I check my device, that more than makes up for it. I like the ease of use that comes with having a pattern to unlock my device instead of the standard password lock. It has plenty of options to tweak to most every user, and best of all it lets my second most-used app do it's thing ...

This one I love. Leave It On is a totally customizable app that lets me set my screen to activate when I receive certain messages, or leave my backlight on for extended periods should I need to do so. I have Leave It On set to display my SMS messages (including message preview) as well as light up for Twitter mentions, Facebook and BBM. The popups display even when my device is locked with PatternLock (unfortunately it won't work over the native password lock - the screen will illuminate but not display popups). The options go way beyond that though, so if you haven't used it you should definitely check it out.

More information/download of Leave It On

No brainer on this one. I love to use Twitter when I'm on the go, and given that there aren't too many choices for Twitter clients on BlackBerry, this one does the job just fine. I love the integration with my other BlackBerry apps, the Push mentions and having everything right where I need it. It's free and it works - end of story.

I love Evernote on every platform. I use it for countless things like keeping track of upcoming posts, all my recipes, to-do lists, vacation scrapbooks and much more. Having all the things I need with me when I'm on the go is a huge plus. Evernote can be used for loads of different things depending on your needs, and it is now (and will always be) one of my tops apps. Period.

I'll admit it - I have a mild Facebook addiction. Being in front of my computer all day I find myself constantly checking out my Facebook feed, and when I'm out and about and have some down time I do the same. The Facebook app for BlackBerry isn't the greatest, but it does what it needs to (for me at least). I can check my feed, update my status and post photos of kittens all day long.