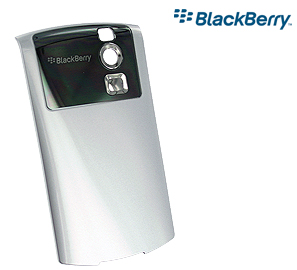 When Your BlackBerry Takes a Beating, Think Replacement Parts!

Whether you baby your BlackBerry or abuse it there will likely come a time in your BlackBerry-ownership life where you will be in need of a replacement battery cover. Maybe you'll drop your BlackBerry on the ground and the battery cover will fly off and get stepped on, or you'll accidentally key it carrying it in your purse, or even if you have your device skinned and well-protected, your three year old son will pry your BlackBerry out of its protection and give it a good chew (this also happens with pets).

Or if you're like me, you'll just wear the darn battery cover out by using it too much. I've tried a lot of cases and holsters and skins with my Curve, but my favorite is still the Seidio Rubberized Holster for an Unskinned Curve [ store link | review link ]. It offers that "Quick Draw McGraw" type of access (and sleep mode functionality) that frequent berry users demand. But from all that pulling my Curve in and out of its holster and holding the device tight while I play Brick Breaker, my berry started to look beat. And while a beat-up looking BlackBerry means often means its time for an upgrade, in this case I wasn't quite ready - time for a Replacement Battery Cover !

OEM Replacement Parts
When it comes to a dinged up device, Original Equipment Manufacturer (OEM) parts are the route to go for making your device look and function like new again. RIM is pretty good with making OEM components available, specifically for the items that wear down over time from use, which with BlackBerry smartphones is namely replacement batteries and battery covers. Despite my frequent typing and messaging I have yet to ever wear out a keyboard, so good job RIM!

Replacement Battery Cover for the BlackBerry Curve
There's more to show and not too much to say about an OEM replacement battery cover, so I'll let the images do the talking. What I will say though is that the battery cover came neatly packaged, was easy to swap, and for the "looks" it brought back to my BlackBerry Curve was a very worthwhile investment.

New Door On and Peeling Off Protective Plastic

My BlackBerry Curve 8300 is NEW AGAIN!

Overall Conclusions
5 out of 5 on all accounts. The OEM replacement battery cover makes your BlackBerry new again. It designs and functions as it should, looks great, is easy to "install" (not sure if you can really call it an installation though) and serves its purpose of keeping the battery held inside nice and tight!

The ShopCrackBerry.com store carries a selection of replacement battery covers for BlackBerry smartphones, including the Pearl, 8800 series and older devices. The selection will be growing over the weeks ahead as we add more colors to the inventory to match all of various model colors now on the market, so check back if the color you are looking for isn't in stock yet!