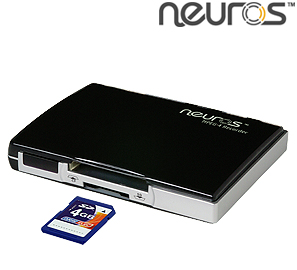 For BlackBerry users, the idea of using our beloved Berry for video and music is a new one for us.  Thanks to the Pearl and the Curve, it is a real possibility.

The challenge is getting all our media onto our devices.  This is where the Neuros MPEG4 Video Recorder (store link) comes in.  This little device is really a mini DVR or VCR that can record DVD’s, TIVO programs and even live TV onto a portable media card. Once recorded, we transfer the media file to our BlackBerry and we have video content with us at all times.

It sounds great – but, how does it work?  Pretty darn well.  Read on for a full review or the Neruos MPEG4 Video Recorder 2.

About Neruos:
Formed as the result of a spin-off from Digital Innovations, in December of 2003, Neuros was formed with the mission of building leading edge media devices around three pillars: Innovative features, openness, and community. (insert Neuroslogo)
Since spinning off from DI, the company released a second version of its Neuros Digital Audio Computer, as well as the MPEG-4 Recorder, 442 PMP, and the Neuros OSD.
The “Official Line” from Neuros, as found on their web site reads as follows:

A mini digital VCR for the Sony PSP™, iPod™ Video, Smartphones and other handhelds. With the Recorder 2 and almost any handheld, you can easily:

see table below for recording resolutions:

CF and MMC/SD/MS Duo All Accepted!

Storage Card Compatibility (High Speed cards may not be supported):

So now that you have all the details, let’s go on to the review:

What’s in the Box?

I was pleasantly surprised when I opened up the Neruos MPEG 4 Recorder.  This is a very comprehensive package.  Included are the Unit itself – which was very small and stylish, a Remote Control, a Power Adapter, 2 RCA Video Cables, a User Manual and a CD with the contents of the manual and links to an online Wiki and other sites.

The Neuros MPEG4 Recorder 2 is about 4 ½  inches by 3 ½ inches – small enough to hold in your hand, but big enough to seem substantial.

The front of the unit contains two LED’s on the left – a Green Power LED and a Red Record LED.  The IR port is next to the LED’s.  Front and center are the slots for the various cards for recording.  A Compact Flash slot is at the top and under that is a slot for either an SD, Memory Stick Pro or MMC card.

On the back of the unit are jacks for DC Power, AV Out and AV In.
The unit is a shiny “Piano” black plastic design with grey plastic edging.

Set up:
The Neuros MPEG4 Recorder 2 was fairly easy to set up.  As we will see, set up and usage are two different things!

Initial setup involves attaching the RCA Video cables to the unit and to your TV. Plug in the cable to the AV Out jack on the back of the unit and attach the familiar Red, White and Yellow plugs to the component in jacks on your TV.  On my HDTV, these jacks are right on the side – on other TV’s they are on the back or front.

The other RCA cable goes from the AV In jack on the back of the recorder to the “Out” jack of the Video source.  For my testing, I just plugged the cable to the “Video Out” jacks on the back of my DVD player.

Next, I turned on the TV and cycled through the various inputs and found the “Component 1” screen which corresponded to the correct input for the Neruos. Once in the correct place, I powered on the Neruos with the included remote and the main screen was visible on the TV.

Ease of Use:
This is an emerging technology – so I expected things to get a little complicated as I tried to actually use this device.  My expectations were not disappointed.

The somewhat counter-intuitive remote control is required for accessing all commands on the screen. The biggest problem was the interface was reminiscent of an old Amiga computer.  Grainy and blocky icons and cluttered menu screens were not intuitive to navigate.

I put in a blank SD card in the front slot and it was immediately recognized on the screen. The directory of the card was on the left hand side of the screen and I could navigate to a particular folder if I so chose.

The folder directory lets you see the contents of the card.  So, for example, if your card was filled with pictures, you could view the pictures on your TV screen through the Neruos software.

My goal was to record a DVD – so that is what I set out to do. Before I could record, I needed to set the correct output for my intended device – in this case, a BlackBerry Pearl. You can record Video for playback on everything from a PSP to an iPod to a Smartphone to a regular cell phone.  In order to do so, you need to know your maximum resolution and the frame rate capabilities of your device.  This is where things got a little complicated.

There is also the option to select a  368x208 resolution for capturing Video that is in Wide Screen (16:9 ) format.  There is a 15 fps options as well which works well on most cell phones and smartphones.

Navigating the interface was a bit confusing to set the options – but eventually I set my options for 320x240 at 30fps.

I started the DVD I wanted to record and it showed up in the preview window of the Neuros software.  I pushed “record” and the red light went on telling me that the DVD was being recorded onto the SD card.

The Neuros MPEG4 Recorder 2 records in real time – so you have to let your video play from start to finish.  Patiently, I let the video run its course.  When it stopped I pushed stop on the remote and removed the SD card.

Does it really work?
Now, for the moment of truth.  I put the SD card in my computer and then found the video file and copied it to my BlackBerry.  You can use the Roxio media manager to do this from your BlackBerry desktop software, but I like to simply enable disk use on my Pearl and just copy files right to the card.

I fired up the media player on the BlackBerry, navigated to “Videos” and low and behold I saw the video file.  I clicked the trackball and my full length video began playing on my Pearl.  This was very cool.

Overall Conclusions:
This is a “cutting edge” product.  It is not perfect.  The interface on the TV is clunky and difficult to navigate.  Setup was straightforward and pretty easy – but setting the correct output settings was just not intuitive.

The bottom line is that once configured, this device does exactly what it says is will.  Video from any source – a DVD, TIVO or even live TV can be recorded onto a memory care and transferred to your iPod, PSP, phone and your BlackBerry.  You could have recorded the Red Sox game live and put it on your BlackBerry for posterity.

At $139.00 in the CrackBerry store, it is not cheap – but it is just like a mini DVR – capable of recording anything in a format that you can take with you.