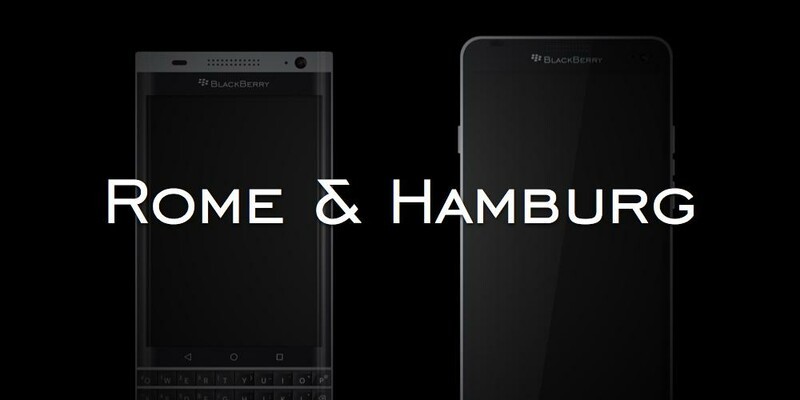 Chances are by now you've all read the headlines about the 'leaked' renders of BlackBerry's next Android devices. There were a ton of sites that ran them without a second thought and, well, that has caused a lot of confusion among those who care about BlackBerry and were already familiar with the images. The problem? They're not 'leaked' renders of the next BlackBerry devices, as in renders created by BlackBerry that have somehow managed to escape Waterloo.

No, they are in fact the creation of Dylan Habkirk, and they had been floating around Dylan's BBM Channel and the CrackBerry Forums for days before someone decided to download them, watermark them with their logo, and misrepresent what they actually were. A problem Dylan spoke about in his latest post clarifying what the renders are and why they exist while offering some details on the Rome and Hamburg devices.

Today, I want to talk about the Hamburg and Rome posts you've likely read all over the internet about leaked renders, and I also want to show you some closer details about these devices with some new renders for you. If you're a hardcore BlackBerry fan, you've likely visited my BBM Channel and peeked at the renders shared there of the two Android devices - or perhaps you've attempted a swing at one of my tough puzzles.

A concern of mine was when these renders and bits of information was taken by a site (who I don't care to reference) and watermarked as their own - which left in the wrong direction, misleading larger tech sites into publishing as leaked renderings. To make things clear, these renderings are not leaked by any means. They are replications of device plans and / or prototype units that I have seen in person. Not to be mistaken for a truly leaked image, like when we shared the first image of the BlackBerry Passport Silver Edition, originally leaked as "Oslo".

To start with the Hamburg, I've never actually seen this device in person. In fact, I can't find a source to substantiate any specifications for this device (which I originally was told would make it out before the Rome). I did however come across internal device sketches for the handset - which largely copies the Z30 form factor. These internal images are in which I based the renders for the Hamburg. Clarifying more over, the codename Hamburg may not be as accurate as the Rome's in terms of existence.

As for the Rome, it's a device I've actually had the pleasure of seeing in person on a few occasions here in Waterloo. Again, a device we saw first leaked by CrackBerry months ago, known then as the BlackBerry Vienna.

Since then, the device has undergone some major refinements. One of the units I was shown, had some biometrics under the hood. If you played one of the puzzles on my channel - you likely saw the Rome with a fingerprint scanner integrated into the space key. Apparently, this was the most logical spot to place the sensor without having to add a distracting sensor elsewhere on the device. With Android M and N, BlackBerry is finally able to integrate the feature into software - despite showing no enthusiasm towards the tech when it came to BlackBerry 10 handsets. Whether or not it sees production units is still unknown, but September is a while away.

Apparently, the Rome has internal specs that are like that of the Priv or otherwise the same. The screen may feature a dual curved edge as well, which left some questioning how the keyboard will shape. Think of how the Priv's keyboard has a slight contour at the edges where the slide comes into contact. The screen is crisp, though I wasn't told resolution. One thing that was pressed into me was that since complaints of front facing cameras with the Priv (due to size limitations), the Rome kicks this up by adding up to an 8MP front facing camera. For Rome, we hear it could be priced as high as $500 USD or $629 CAD. All of the Rome units I saw had a special hardware button (not found on any other phone that I know of) which will have major uses for both governments and consumers - but I don't want to mention it further than that.

Now, I do not want to copy the rest of Dylan's comments here, because that wouldn't really be right. Hell, he's already had his images jacked without credit. So I suggest if you're looking to read the rest of the details then read the full post including the part about the new logo typeface on the renders which there's no indication BlackBerry will use, despite many freaking out over its looks. For the record, that image was jacked as well and filtered to hell to hide the fact it was a Photoshop, so if you see it proclaimed as real, it's not. As is rightfully noted in the post, things are always subject to change, and we've seen many devices get canned even after getting leaked, so don't get too hyped on these just yet.