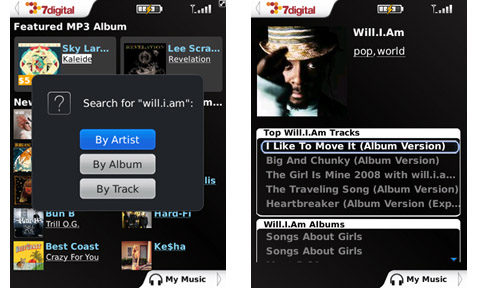 Kevin first gave us a taste of what 7digital had to offer at WES 2009 and again this year when attended the Mobile World Congress 2010 back in February. In fact, Mike Lazaridis noted that their app was a Super App in his MWC keynote speech. 7digital is one of the leading digital media providers, with over 10 million (fully licensed) tracks in their global catalogue and is continually growing.

Through their 7digital Music Store BlackBerry app, users can easily browse (by artist, tag or album) and buy DRM-free high quality MP3 music. Included in the application is a media player; enabling you to import your playlists and MP3 files. You can also check out the charts, weekly features and new music. The application has been updated to version 1.4.5 and now includes the following:

When I get my hands on a Torch 9800, I will be definitely be adding 7digital music right away. You can pick up 7ditigal Music Store, for free, from BlackBerry App World.