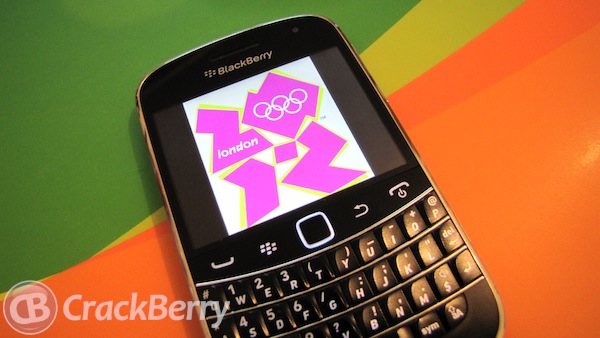 With only 13 days to go until the 2012 Olympics and Paralympics kick off in London what better way than to keep up to date with all the upcoming news and results than on your BlackBerry. There are two official apps to download now in BlackBerry App World, for free, and they are both totally awesome. In addition ScoreMobile has updated its app with an Olympic section so if you currently use the app you will be able to get notifications.

All eyes will be on London from 27th July - 12th August and even if you are not a huge sports fan I would imagine that most people would at least be interested in how their country is performing. Whether you are into the Olympic/Paralympic games in a big way or not the applications have got so many great features that chances are you will make good use of them. I'm not massively into sports but I am going to be using the official results app for sure, just to get the medal notifications. Mind you, Team GB won't win the games but it's the taking part that counts.
Carry on reading for in depth details and a video guide of my favorite app in action.

First up we have ScoreMobile. The popular sports app now has an Olympic section added to it so you can get up to date alerts on both medals and breaking news. The app isn't as nice on the eye as the two official ones but it is meant to provide you with just results and it does that perfectly.

London 2012: Join In App For The Olympic And Paralympic Games

Next we have the London 2012: Join In App For The Olympic And Paralympic Games. The application is essentially a planning tool but you don't have to be attending the games to benefit from it. A full, up to date events listing will ensure you don't miss out on any action. Here you will find details of local activites, live (big screen) viewing and festival cultural events.

The Olympic Torch is currently doing its tour of the UK. You can use the app to keep track of its whereabouts and view details of the torchbearers. The app will allow you to even see where the torch is in real time.

In addition there is a spectator guide, a list of free road events, interactive searchable maps, access and seating maps if you are attending the games, live updates including news and photographs and finally a feature called ‘My Games'. Here you can create a personal schedule and with BBM, Twitter and Facebook integration you can also keep you friends in the loop too.

More information/Download London 2012: Join In App For The Olympic And Paralympic Games


London 2012: Official Results App For The Olympic And Paralympic Games

Keeping track of results is made easy with the London 2012: Official Results App For The Olympic And Paralympic Games. The main purpose of the app is clearly results and you will have full access to all 36 Olympic and 21 Paralympic events. The live schedule will enable you to follow the latest events as they happen in real time. Once again we get BBM, Twitter and Facebook integration for keeping your friends informed.

The calendar schedule will allow you to view day-by-day which events are taking place and you can also set reminders and favorites to make sure you don't miss out; a sweet feature.

I hear that medals are quite important at the Olympics. Keeping track of the medal count is a piece of cake. You can do this by sport, country or individual athlete which is a nice option. In addition you can also view all the athletes taking part and personalize the app to follow your favorite ones.

Like the Join In App there is also a ‘My Games' feature where you can set up alerts to keep on track of what is happening with notifications and alerts. Out of the above applications this one is by far my favorite. You can check out a quick video guide of it in action above.

If following the Olympics is your cup of tea then these applications are a must. Go grab one now.