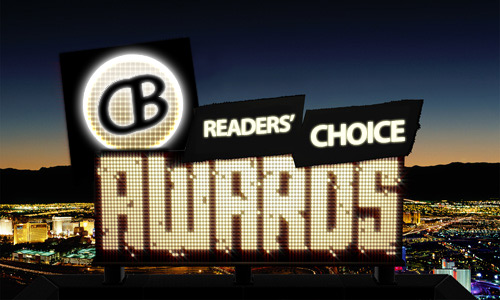 The world didn't end, so it's time to look back on the year that was 2012 and announce our CrackBerry Readers' Choice Awards. In honor of BlackBerry 10 we went with 10 categories this year, and the winners were chosen based on the popularity of the submissions put forth by our readers.

Let's keep the banter short and sweet on this one... Read on for the winners!

While it's technically the 2012 winner for best BlackBerry device, the Bold 9900 is really just holding strong from its 2011 win. Holdng out for BlackBerry 10, we didn't have very many devices released this year to take the crown from the reigning champ, but next year you can bet that won't be the case. For those who value a top notch communication experience, especially when it comes to buttery smooth feel good typing, the keyboard on the Bold 9900 is the best keyboard to ever grace a phone. We're not sure how it can be topped.

Files and Folders for the BlackBerry PlayBook is an amazing file management utility that lets you browse and manage files both on your device and in the cloud. With its multiple updates in the last few months, it's no wonder that this app took the top prize.

Pacemaker took a close second this year despite only being available for a few months. It's a great, full-featured DJ app for the BlackBerry PlayBook that instantly won over many users.

FlyCraft was only released for the BlackBerry PlayBook in October, but with its quirky and fun gameplay it's already become a major hit. It was designed exclusively for the PlayBook and the developers have been very active in the CrackBerry forums taking feedback all along the way. This one is definitely worth checking out.

ShadowGun is one title that shows off the great gaming power of the BlackBerry PlayBook. It was available free for quite a while so many users grabbed it up and had nothing but great things to say.

While rumored for quite a while, the BlackBerry Mini Keyboard quickly became a hit when it launched. It created an instant mobile office for PlayBook users on the go and was in such high demand that even ShopCrackBerry ran out of stock on more than one occasion.

5. Biggest Story of the Year

In January of 2012 the BlackBerry world got a shock when it was announced that co-CEO's Jim Balsillie and Mike Lazaridis were out and Thorsten Heins was in. It's been full steam ahead to BlackBerry 10 ever since and Thorsten Heins rightfully earns the spot as biggest news story of the year for BlackBerry. He's recharged RIM's batteries. He brought on a new senior management team, empowered RIM's people and he's a stand up through and through. We've always loved BlackBerry products. But BlackBerry under Thorsten Heins leadership has made us fall in love with the company behind the products too this year.

The best "good news" story goes to that of the press releasing announcing the launch event date for BlackBerry 10. We've been excited about BlackBerry 10 since the PlayBook was first announced. Even though that was for a tablet we knew a new mobile platform for BlackBerry was coming. Then it was named BBX, and then BlackBerry 10 in 2011. But it wasn't until the January 30th, 2013 date was announced that things got really real and exciting. The new beginning is in sight. Bring on BlackBerry 10!

The biggest hit this year came when BlackBerry fans found out that BlackBerry 10 would be pushed back from a Q4 2012 release to a Q1 of 2013 release. It was a big setback for fans all over, but we've stayed strong, put the setbacks behind us and are finally near the official launch.

On January 31st, 2012, CrackBerry posted the first solid image of a BlackBerry 10 phone. That was the leak of leaks for most of the year, until September when an accidentally leaked RIM internal marketing video gave us a better glimpse at the first two BlackBerry 10 phones. We had seen a fair amount of the rumored full-touch L-Series, but this video was really our first good shot of the full-QWERTY N-Series device.

9. Favorite CrackBerry Article/Moment of the Year

We obviously couldn't get by with one winner for this category, so we have a three-way tie.

10. Feature in BlackBerry 10 You're Most Looking Forward To

A close second to the BlackBerry Hub is the all new predictive text touchscreen keyboard on BlackBerry 10. Using Swiftkey as the predictive engine, the BlackBerry 10 keyboard makes typing with one hand a breeze as you can simply swipe the predicted words up as you go to bring a whole new (and awesome) typing experience to BlackBerry 10. The keyboard learns as you go, supports up to three languages at once and in true BlackBerry fashion it has been tuned and refined to perfection. With BlackBerry 10 you're going to hear about the company having the best keyboards whether physical or touch, and it'll be true.