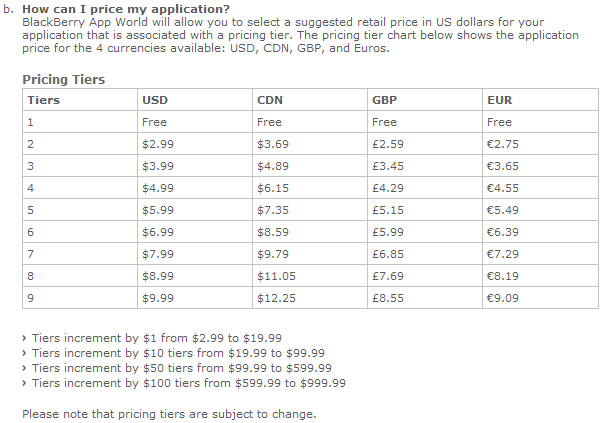 WOAHHHHHH... Hold your Horses! After RIM updated their BlackBerry App World website tonight, they also updated their Developer FAQ which now includes a chart that details the pricing tiers for apps. Take a look above.

It seems RIM has decided the minimum price for paid apps will be $2.99. Potentially good news for developers, but bad news for the BlackBerry owners out there thinking that RIM's application storefront would usher in 99 cent BlackBerry app pricing a la the iPhone App Store. Of course, free apps are still welcome, but as previously blogged the way their developer agreement is currently structured it'll cost money to submit free apps to the store. Most people are willing to pay $3 (or more) for an app if it's a good app. Where the 99 cent and $1.99 tiers fit well are for the not good but fun apps (fart apps, beer apps, etc.) which by the looks of this RIM would rather not see hit their app store. What do you think? Good move or big mistake? Let us know in the comments!

* Update: While going further through the FAQ, I couldn't help but take note of the final question...

Can the user store applications on an external SD card?
Applications cannot currently be stored on or run from an SD card. BlackBerry App World does not permit the downloading of applications to an SD card.

So for those who were hoping the launch of RIM's BlackBerry App World would coincide with a solution allowing you to save apps to the memory card, it appears that isn't in the cards just yet. *