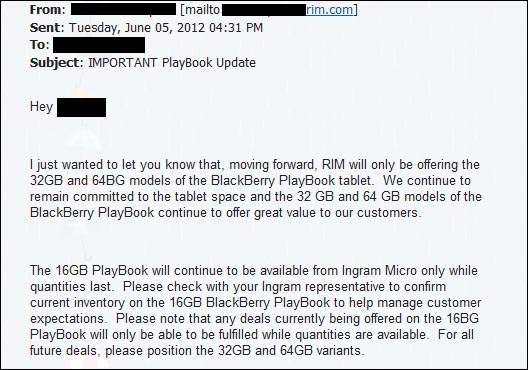 It looks like if you want to pick up a 16GB BlackBerry PlayBook you'll want to do so sooner than later. Forums member ubermanx received an email from Research In Motion yesterday that made it pretty clear that they will not be offering the 16GB model in the future, though the 32GB and 64GB will still be available. Of course, this doesn't mean that the 16GB will immediately be pulled from shelves and become impossible to buy. Plenty of retailers currently have stock both in-store and online. It just means that the stores likely won't be replenished when they sell through this stock. When we reached out to RIM for a statement, we were told "In regards to your question about the 16G PlayBook -there is more value for our customers in the higher capacity models (32 GB, 64 GB), and as such we have decided to focus our efforts there."
There are several reasons why it makes sense to discontinue the 16GB PlayBook. For anyone that owns this size, you know that 16GB just isn't that much storage space. I have a 32GB PlayBook, and several times have run out of space for movies and other media. It's nice to have the option of the lower price point, but who wants to worry about running out of storage space?

Also, with the recent markdowns on the 16GB PlayBook, sometimes even below the common $199 price tag we see on the tablet from most retailers now, RIM is obviously not making money on this model, and in fact is losing money. Instead of continuing to sell through these and see no profit from them, it's better to keep the stock they have for RMA replacement as mentioned by fellow forums member stevedee: "They have to keep enough of every model for quick turnaround on RMA swaps. Since there is a higher percentage of 16GB sold, they have to reserve enough."

This also raises the question of the upcoming 4G PlayBook. Does this also mean that there will only be a 32GB and 64GB version of the new tablet? That remains to be seen, but it seems like a logical conclusion. With BlackBerry 10 coming out soon, it's also reasonable to think that you will need higher capacity storage for pictures, videos, etc. I'm sure there will be plenty of people that see the decision to no longer offer the 16GB PlayBook as the beginning of the end of the PlayBook, however in light of the circumstances, it just makes sense to focus on the 32GB and 64GB models. As stated in the original email, "We continue to remain committed to the tablet space and the 32 GB and 64 GB models of the BlackBerry PlayBook continue to offer great value to our customers." You can join in the conversation in the forums at the link below.