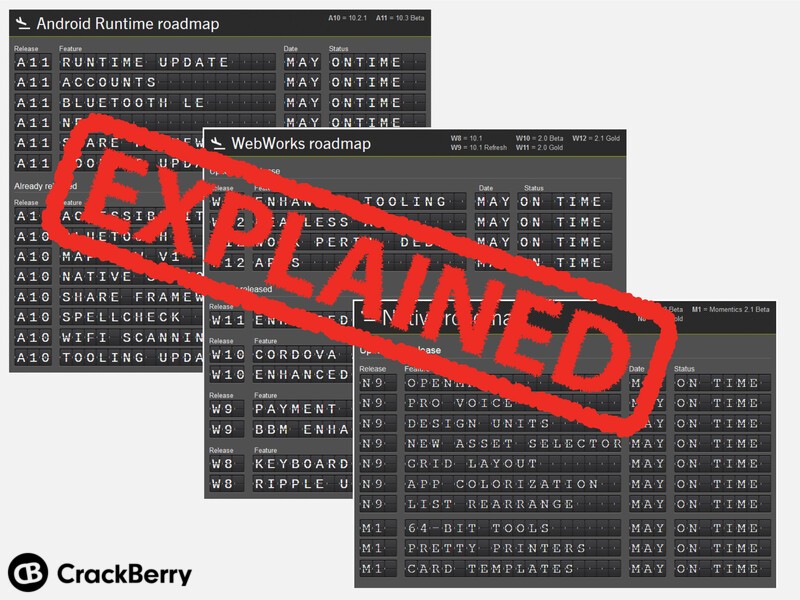 Earlier today we reported the news of BlackBerry updating the 10.3 Roadmap. I'm afraid some may have taken some of the news out of context (good, bad, or otherwise), so I hope to provide context around the line items mentioned. First and foremost, realize this is an announcement for the 10.3 developing environments which will obviously have end user implications but perhaps not quite what you may think. I hope I don't get long winded in my explanations here but there is a lot to cover. I will do my best to "translate" from "developer speak" to end user implications.

I have only known a few developers who used Adobe AIR as their platform of choice.

Three developer environments are being updated and one is getting axed. What does this really mean? First, Cascades/Native is obvious since that is what BlackBerry uses for core applications and is the foundation of everything BlackBerry 10. Next, WebWorks (HTML) is arguably the most versatile web based language and many believe this is where everything is heading. And for the time being, it is a great platform for developers supporting BlackBerry, Android and iOS.

Finally the third platform, love it or hate it, is Android. Android support helps developers big and small quickly and easily get their apps on BlackBerry 10. Quite frankly, I wasn't initially on board with the idea of having Android on my BlackBerry but with each update of the runtime it is getting better and better. Updates get us more Android apps running smoothly regardless if you get them from BlackBerry World or some other means.

So, that leaves Adobe AIR as the odd man out. Honestly, I have only known a few developers who used (and many no longer do) Adobe AIR as their platform of choice. And BlackBerry 10 didn't really support all that much of it anyway. Regardless it is understandable that you may have AIR apps on your device and BlackBerry announced that user release 10.3.1 would no longer have native AIR runtime. That obviously means those apps will no longer work.

From a user standpoint you have two choices, don't ever upgrade to 10.3.1+ or stop using that app. And from a developer standpoint BlackBerry recommends you port your AIR code to another language or recompile your AIR app as an Android apk then convert your apk to a bar. I know that second developer choice sounds kind of like a hack, but who cares it'll work. Also worth noting, BlackBerry has to pay Adobe to have AIR installed on BlackBerry 10, so this is a cost saving choice as well as dropping a relatively unpopular developer platform. Bottom line is Native AIR is dead on BlackBerry 10, and probably won't be missed.

Back to the three platforms that are supported, let's take a look at the Native/Cascades updates. One of BlackBerry10 Developer Relations' rallying cries from the very beginning was they plan to support as many open standards as possible and OpenMax is the next one they are going to support. OpenMax is a media standard, feel free to poke around the web for more info. Next, Pro Voice sounds like a new set of API for native developers to access more audio features on the device. The next two items, Design Units and Asset Selector, are new ways for developers to reuse code to support multiple devices. I've done a write up about the current Asset Selector a few months ago.

From an end user standpoint it is safe to assume that future devices will have different resolutions than the current ones. And yes that could very well mean we will see full HD (1080p) screens in the near future, could also mean lower end specs like the rumored Z3's 960x540, or both. Grid layout and list rearrange are both pretty self-explanatory. Personally, I am happy about grid layout because it was a huge pain to get the grid look in Logic Puzzles.

The last item on the Native list is accent colors. As we all saw in the 10.3 leak the familiar blue accent was replaced by red in many places. I have a theory that was BlackBerry testing the waters there. And I will preface my next few sentences with this is my speculation of how this will play out. I foresee the user OS 10.3 will allow everyone to pick their own default accent color. From there developer can choose to let their app show that user selected color or override that color with an app specific color scheme defined by the app developer. I think this would provide a nice balance of user customization but also allow apps to force their own color scheme for branding/theme. Regardless, if my speculation is wrong it looks like developers will definitely get to force their one color scheme without going completely off the deep end like the Sochi Olympics app or like I did in this code sample.

Hopefully we'll all get a better overall Android on BlackBerry experience

The next three items on the list are updates for Momentics (the native developing tool from BlackBerry). So 64-bit OS support is talking about support of whatever computer the developer is using to write code not BlackBerry 10. I repeat this does not mean BlackBerry 10 will be 64-bit. The next two are also equally less interesting for end users. Pretty printers is a style of text display within the code editor. I layman terms, it makes it easier to tell if something is a "1" (number one) or a lowercase "l". It really helps for easily reading code even at 3am after 4 energy drinks. Lastly, card templates is like when you open the share button in your browser and you pick "share via Blaq," and Kisai Labs had to write that page that pops up (card) from scratch, well now BlackBerry will give developers some samples on how to do that.

Next up, WebWorks (HTML) got an update in November and March and the four items on that list just add some more features that can already be done in Native code. Not much to see here... Finally, Android has two interesting items on the board and four obvious ones. Starting with the four easy ones; Bluetooth LE, NFC, Share Framework, and Tooling update are exactly what they sound like. Now, Android apps that use Bluetooth LE will work, NFC will work, etc.

BlackBerry was very careful with wording

The runtime update brings Android support up from 4.2.2 to 4.3. Just the same as BlackBerry is giving Cascades developers new tools from 10.2 to 10.3, Google gave Native Android developers new tools from 4.2.2 to 4.3. So in the cases where Android developers took advantage of those new tools BlackBerry will also now support those features. Also, with each update of the runtime we've also seen BlackBerry optimize the player to run better. So it is safe to assume even in the cases that an Android app doesn't need 4.3 to run, hopefully we'll all get a better overall Android on BlackBerry experience.

Now on to "Accounts: Android applications that require access to an Android account will now be supported with BlackBerry 10 account integration." I'm afraid to read too much into this statement. On one hand, like many others, I read this as Google Play Services is coming to BlackBerry 10 and all the masses rejoice. BUT… I also read this as perhaps BlackBerry is just saying that they are providing Android developers an easy way to remove that portion of their code and replace with "BlackBerry10 account integration." Since I don't like to assume/jump to conclusions, I am honestly going to take the wait and see approach here and encourage everyone else to do the same. Perhaps we'll hear some clarification around that description soon, but I'm sure BlackBerry was very careful with that wording for a reason.

As I said in the beginning of this post, I hope I didn't drag on too much with this explanation. I just felt the simple reporting of the news earlier today missed out some key explanation around some of the items. I will admit that my explanation of the "Android Accounts" may not help much but I think I covered everything else pretty well. Sound off in the comments if you still have questions about the much deeper explanation for this announcement. Of course, none of this will matter until May anyway but it's good to have the info out there.