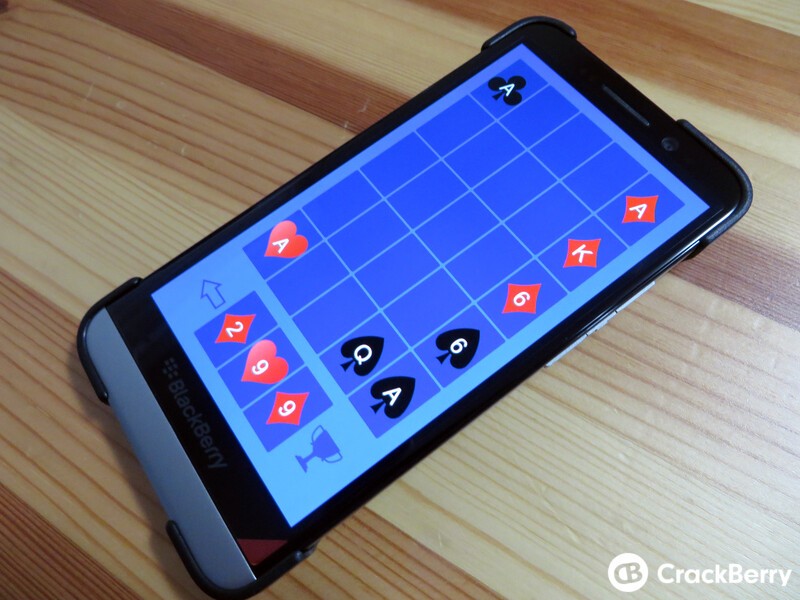 Some of the best types of games are the ones that you easily pick up, put down and pick up again. BlackBerry World is just ripe with games that fit this concept, not all are addictive enough, yet alone difficult, to take advantage of this idea. If you're looking for a new game to challenge yourself with then take a look at Grid. This recently released game is played with cards and grids (initially a 5x5 grid). Your goal is to fill said grid with said playing cards, the faster you fill the grid the better; but it's not as easy as that. Where's the fun if it doesn't really grab your attention?

The game presents itself as follows; a 5x5 grid lay before you with cards from one of four suits placed in each corner. Each card a value, just as you would see in a standard 52 card deck. Below this grid is a field where three cards are generated in random order, these are the cards that you place on the grid. As you place a card, another random card takes its place; no two cards are the same. Now filling the playing grid with cards isn't as easy as you may think, there are rules that you have to follow here kids!

Tap on a card that you want to play and the grid will highlight a space (or spaces) where you can play the card. Now before you play the card you have to remember the two stipulations of the game; the card has to be placed adjacent to a card of the same suit. Heart to heart, spade to spade, etc. It can be beside another suit but it has to be initially placed beside a card of the same suit. The other rule makes it tricker; the card you place has to be placed next to a card of greater value. So if you are playing the 8 of hearts, the value of the card already on the grid has to be 9 or higher (and a heart as well).

If a card is presented to you, and there is no place for it to be played, the space it resides in is darkened. Fill the grid and you win, run out of cards to play and its game over. The faster you fill the grid, the more points you score. If that's not enough of a challenge for you, you can play the hard mode which gives you a 6 x 6 grid to play with. I agree with the developer when they said "incredibly easy to play, hard to beat and even harder to master". It's the prefect game to play within a short period of time and also demands your attention; simple in design, not so simple in game play.

The regular price of Grid in BlackBerry world is $0.99, but the developer has decided to offer up 100 free copies to the CrackBerry Nation. What better way to get addicted to a new game than to pick it up for free?

If you want a free copy, please follow these steps:

We all know these freebies go quickly so don't hesitate to nab Grid. It's available for the BlackBerry Z10, Z30 and Porsche Design P9982.