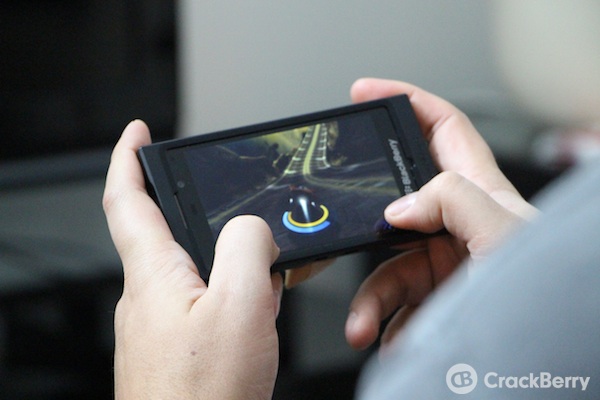 Let's face it, BlackBerry phones have never associated gaming. Or fun for that matter. It was all work and no a little play, but now BlackBerry 10 drop kicks everything we knew about gaming and turns it up to 11. While BlackBerry 10 will be great for getting things done, it will also be great for gaming. The BlackBerry PlayBook gave us a good taste BlackBerry gaming on a tablet, but now it's heading to phones and hitting the road. It's long overdue that we get to talk about BlackBerry and gaming together and actually be so pumped about it, so stick with us and see why gaming on BB10 will be awesome.

While BlackBerry 10 will hold some amazing features - the BlackBerry Hub, keyboard, BlackBerry Balance - that will all help you get things done, it will also reserve some time for play as well. BlackBerry 10 devices will have some amped up hardware so games will look and feel amazing.

There are already a slew of great games on the BlackBerry PlayBook that will carry over to BlackBerry 10, and we expect to see some bigger titles from companies like EA and Gameloft make their debut after launch as well. Right now you can already download BlackBerry 10 games like Radiant Defense, Dead Space, Shadow Gun, Ragged Edge 3D, FlyCraft and Bards Tale, and devs are also porting over games from Android and iOS to BlackBerry 10.

Gaming on BlackBerry 10 vs. BBOS is truly a huge leap. Thinking of how we used to play Brickbreaker non-stop or even the games that we thought were good -- everything now is just blown out of the water. Just today I hooked up my dev alpha to our TV and played a bunch of games. In between I paused, answered some emails and went right back to it without a hitch.

Take Ragged Edge 3D for example. I'm in love with the game, and unlike before where I would have to pull out my PlayBook or <gasp>iPhone</gasp> to play something like that, I can now always have it on my BB10 phone and not have to worry about toting around a dedicated gaming device.

There's also a cool Games app that will house all of your scores for supported games and let you make connections with friends. You can see what everyone is playing and compete with your buddies for bragging rights. Currently there is a good number of games already being supported, and we expect plenty more to follow.

Our eyes are wide open for BB10 and we're no doubt excited for all the work features, but make no mistake, BlackBerry 10 will be a truly awesome mobile gaming platform as well. In addition to the announcements at the launch event on Wednesday, hopefully we'll hear some more on the gaming front as well.